The Legacy of Muhammed Ali, Andy Warhol, and Simon Bull 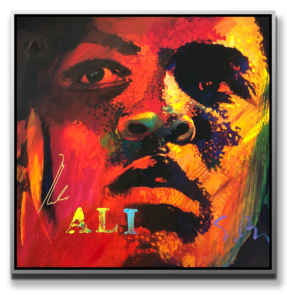 ALI LXXVII  33” x 33”  Mixed Media Original on Canvas, the boxer in his prime

In 1977, when famed collector and friend of Andy Warhol, Richard Weisman, asked Warhol to create a series of portraits based around sports icons, he had no idea the legacy he would help create.

In fact, the sports stars he created artworks around, including Kareem Abdul-Jabar, Willie Shoemaker, and the legendary Muhammed Ali – became even more popular than his artworks with film and television stars, leading Warhol to exclaim, “The sports stars of today are the movie stars of yesterday”.

This legacy led the artists and athletes to collaborate in new ways which led collectors to see these athletes in different light.  They weren’t just athletes anymore, they had been elevated to celebrity.  While we think of athletes today as celebrities, we can thank Warhol and others who saw through the sport to the person.

One can only imagine what an incredible honor it was when looking for someone to create new portraits in this lineage, Muhammed Ali turned to Simon Bull.

Simon has always been known for vivid, energetic artwork, which had an immediate connection with Ali.  The movement within Simon’s artwork mimics the way the boxer was known for moving.  When two colossal giants of their fields come together, the results will always be spectacular.  Simon Bull’s renditions of the great Muhammed Ali were nothing short of incredible and continue to be recognized as brilliant depictions of Ali.

While Ali and his wife Lonnie had discovered Bull’s artwork from their own interest in art, the connection between the boxer and the artist became intimate enough to the point where Simon was asked to create a series of portraits chronicling the champ’s career.

For inspiration, Simon drew from the history of art, following in the footsteps of Warhol himself, and the story of the boxer to present him in an energetic and passionate light – the way we all remember him.

Bull’s use of color tapped into what he described as “a thousand different emotions” in Ali’s expressions, while the movement in the pieces mirrors the grace and energy of the boxer in the ring.  The focus was on the character and storied history of Ali, and how to capture the champ in a new light while staying true to everything he is known for.

Simon Bull and Meuse Gallery are honored to still present a very small collection of these beautiful signed portraits for acquisition, both in Carmel-by-the-Sea, and our newest gallery in the heart of Napa Valley in St. Helena. We invite you to come experience a part of history. Simon Bull unveils the Ali-Obama portraits with Ashley Judd at the Kentucky Bluegrass Ball, with Muhammad and Lonnie Ali looking on 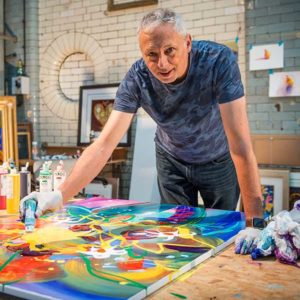 Simon Bull is one of the top-selling artists in the United States and one of the most popular artists in the world today. Known for his bold use of color, his vibrant paintings are infused with a joy that celebrates all that is good in life.

Simon Bull is the official artist of the 2019 National Cherry Blossom Festival in Washington DC. He is a two-time winner of the prestigious U.S. National Association of Limited Edition Dealers (NALED) Print of the Year award; recipient of the NALED Medal of Honor for services to the art industry, and has been the official artist of boxing legend Muhammad Ali and of the U.S. Winter Olympics.